A Synopsis of My Personal Cosmology

What My Life as a Priest Has Taught Me

Recently, my friend, Tom Thomas, issued a challenge: “Telescope your cosmology, your entire thinking, into one homily.”  If I can try to telescope 66 years of life, 49 years of meditating and 41 years as a priest into one homily, we'll see what happens. Now, I know that it is a ridiculous kind of exercise. And I know that a map is not the terrain. And a cosmology is not the reality. But we need maps to guide ourselves.

Buddhism has a saying, “If you meet the Buddha on the road, kill him.”  In other words, if you create a theology that you really believe in, “kill it before it kills you.”  But we need theologies to maneuver as we try to understand what God is. There is a great statement by the Christian mystic, Meister Eckhart, “I pray daily to God to rid me of God.”  As soon as we attempt to create reality, we try to express in words what essentially is ineffable.

So, I have to navigate between giving you enough detail to let you know what my thinking is, and at the same time, to not swamp you with so much stuff  that I do not confuse you in the process. Now, because I'm Irish, I can't be succinct. So, I'm not going to be able to tell you in one phrase what my cosmology is. I'm a bit more like Moses. So, I'm going to be rather wordy.

A YouTube video of my original homily appears below. I've also included everything in the drop-down panels at the left of this page so that you can read at your leisure.

May God continue to hold you tenderly in the hollow of Her hand. 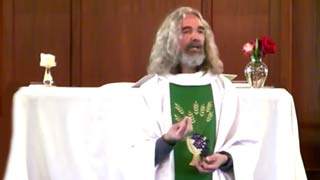 Return to Top of Page